I had the happy opportunity to have lunch at New Orleans Cafe today. If you are looking for good food around Crows Nest then its well worth a visit. 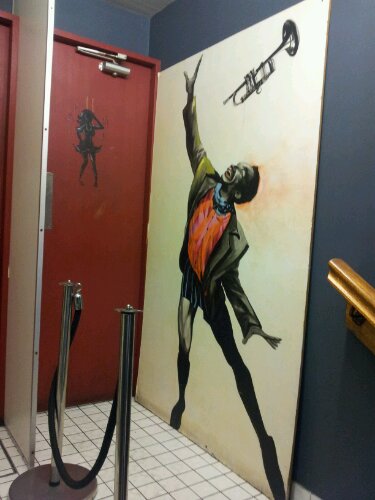 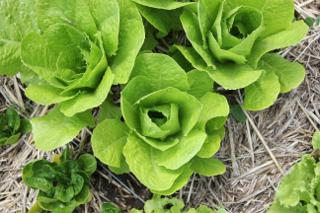 I love food, especially fresh salad.  And with the weather warming up salad makes a good light meal for dinner with some grilled chicken, fish, or a hard boiled egg.

To that end the veggie garden has an abundance of lettuce of different verieties growing this year.  Along with onions (who’s leaves are great chopped and tossed in) and a range of herbs.

Lettuce has proven remarkably easy to grow and they also look rather pretty! 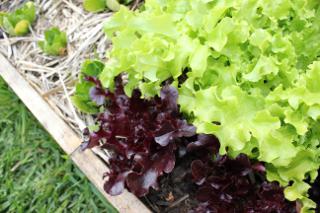 Lunch today had a Japanese theme. I am quite partial to Japanese food, but I must say that I love teriyaki. 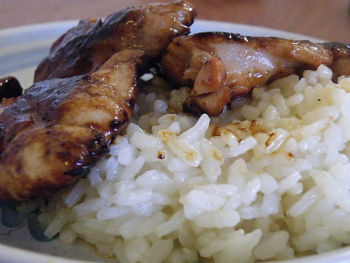 Teriyaki sauce is simplicity itself to make. Just take soy sauce, add mirin (sweet rice wine) to taste (if you don’t have mirin, then sake and brown sugar will do). Chicken (or any other meat) can then be marinated in it and (as the meat is being cooked) more teriyaki sauce brushed on to get that seductive dark glossy look.

I am told that traditionally the Japanese use teriyaki on fish, but outside of Japan it has become popular on chicken and other meats.

Sadly, I ate my lunch before taking a photo of it today, but I have found a photo of teriyaki chicken and rice for this post.

I love Japanese cuisine, but don’t get to eat it as often as I would like. Having had this little adventure, I think that it is probably time to see if I can whip up a Chanko-Nabe (a Japanese one pot stew based on chicken broth with meat and vegetables famously created by and for Sumo wrestlers).

This dish is typically cooked at the table and everyone serves themselves from the pot. I think that it will make for a delicious hearty meal, just right for cold, wet winter days.

The image used in this page was found at Wikimedia Commons – http://commons.wikimedia.org/wiki/File:Fried_chicken_thighs_with_rice.jpg.

I made ravioli for lunch recently. I have been asked for the filling recipe by a friend over at Concierge du Monde, so here it is:

I make each ravioli using a rounded teaspoon of the filling mixture. This recipe should be enough filling for fifty or so ravioli. I prefer to make my own pasta. If you do, then the pasta should be rolled as thin as you can make it. I find that gives the best balance of texture and flavour.

Cooking time for these ravioli should only be about three minutes in boiling water. To be sure, pull one out and chop in half to check if it is cooked through before removing the rest. Serve with the sauce of your choice. I prefer a basic tomato, herb, and cream sauce that won’t compete too much with the flavour of the ravioli.