I don’t mind a bit of television in my down time, and I have been interested to see over the years how the depiction of sex has evolved in popular culture (like TV). Sex in mainstream movies is still very tame – hamstrung by the need to meet sensors requirements, directors tend not to risk too much, lest their work be shredded under the sensor’s knife. Television though, with its long format, high volume, and (relatively) low cost can try things that are more risky. 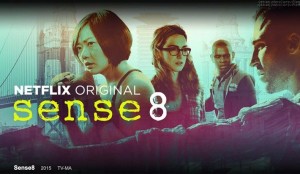 This is not so surprising though since Lana Wachowski, one half of the Wachowski siblings (born Laurance), underwent gender reassignment to become Lana around 2008. As such, I am sure that the transgender character in Sense8 will be at least in part auto-biographical. And there is nothing like an intense personal experience to give a story depth and impact.

It’s not about conforming to other peoples’ ideas of “sexy”. It’s you experiencing your body, your desires, you mind, and other bodies, other minds, other desires and finding out how they work best for you.

So I am saying thank you to Sense8 and the Wachowski siblings, the cast and crew. It takes guts and determination to make something that pushes boundaries. I am sure that much of conservative America (and Australia) will have real trouble with it, but I am hoping that the show will sell well, the studio make its profit, and subsequent seasons be produced.

I have a strong desire to see sex portrayed in a more realistic and well produced way on screen and I think that this is a leap (not a step) in that direction.